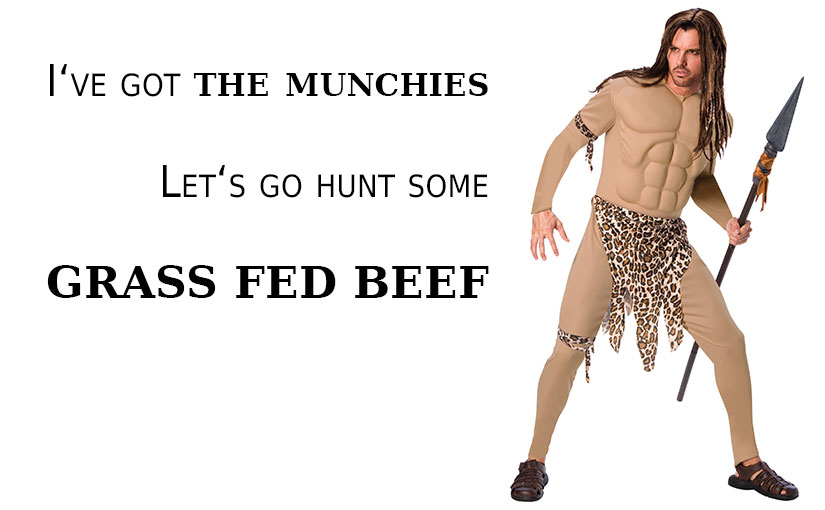 We need to eat like our ancestors of the Paleolithic Period did because this is how we have evolved!
Paleotitian

Seems legit at first glance, doesn’t it? Let’s give it a little more thought. Our ancestors goal, 2.5 million years ago, was to get into their late thirties without starving. Ours is not. We’d rather live into our eighties without degenerative deseases these days.

But let’s just assume it would be a good idea to mimic their behaviour for the sake of argument, shall we? Imagine wandering a Savannah with wood spear and stone knife in hand. You are also equipped with the knowledge of sparking a fire and identifying edible plants. Medical treatment consists of a Shaman dancing and chanting. Would you rather plug berries and dig up roots or hunt animals?

Maybe there has been a drought so no berries to plug and no roots to dig up. Because starving isn’t an option either, you grumpily decide to hunt that gazelle over there. You run after the poor beast until it collapses from heat. This is called Persistence Hunting and works because we can regulate our body temperature by sweating. Gazelles can not. Unfortunately that whole running burns a lot of calories and is quite dangerous (broken ankles, stirred up lions, etc.). If only there had been no drought 🙁

You now loom above a collapsed gazelle. Luckily you got your tools at hand, your body alone is neither capable of carving nor digesting the animal. After you have eaten the roasted meat you sit at the fire, musing about how desperate and bloody that hole endeavour had been.

Considering the risk/reward ratio, hunting must have been a rare and frantic act in the beginning. As our tools and techniques evolved over the centuries, this ratio shifted to the better. The big game-changer had been the invention of agriculture around 11,500 years ago. From then on we had carbohydrates without foraging and animal produce without risk.

This is what a Doctor of Medicine has to say about Paleo:

The human body | Master Of Utilization

Everything you put into your mouth is either carbohydrate (carbs), fat or protein – a macronutrient. Ideally, brains run on carbs (glucose), while muscles run on carbs for high intensity (anaerobic), and fats on low intesity (aerobic) activities. But what if things are less than perfect? Your body will metabolize subpar energy sources in order to function. Even the protein your muscles are built from can be consumed for energy in a starvation-scenario. You can also run on fat alone if the preferred carbohydrates are unavailable. This is called Ketogenesis and smells pretty bad.

„Paleo“ is a low-carb, high-protein diet. It works really well for weight loss, because you force your body into an adverse situation, where the preferred energy source (carbs) is scarce. I went down to 10% bodyfat on this kind of diet over two years, vast amounts of sports involved.

Paleo as a lifestyle

If your single goal is weight loss, it might work out for you. For me it didn’t and here is why:

My body did send a clear message after those two years: stop that, it hurts! I had an inflammation built up in my right shoulder and elbow. Now, eight years later, my shoulder is not back to normal.

As mentioned above I no longer believe that we are born to eat diets high in fat and protein. When I look into the mirror I see a primate, not the teeth/claws of a carnivore.

You’re Not You When You’re Hungry
Snickers

On a low-carb diet I’d been pretty much hungry all the time because my body lacked the carbs to burn comfortably. Again: this works well for weight loss, but it’s not a feel-good lifestyle to me. Even a friend of mine noticed that „I am not the fun guy I used to be.“

Have you experienced a Paleo or low-carb diet yet? How did it work out for you?